Cinema discourse looks at current and classic movies from a literary point of view. We also have top movie reviews, current movie reviews, film ratings, movie blogs and movie history.
You are here: Home / Uncategorized / On The Walking Dead 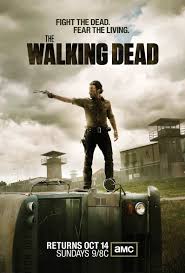 As I have pointed out elsewhere, television is now the great new medium that is taking over the role once occupied by cinema, especially the role of miniaturizing ancient and long forgotten cosmologies. And so, from now on, I will be including reviews of television shows on this site, along with contemporary films. Frank Darabont’s television show, The Walking Dead, based on a series of graphic novels, is one of the best of these new shows and I want to say a few words about it here.

The Walking Dead is a sort of experimental laboratory for probing utopian societies, and the evolution of the show thus far — currently in its third season — has progressed through a series of such miniaturized societies. In this respect, the show is continuing where the great utopian / dystopian narratives of classical literature, from Plato’s Republic to Fritz Lang’s Metropolis (and then onward into such celluloid narratives as The Truman Show and Dark City) left off. Film has currently traded the exploration of multiple utopias for precisely one utopia, that namely, of comic book Gotham, and has left the exploration of other utopic / dystopic possibilities for television.

The show’s first season explored, and then rejected, the modern megalopolis as ideal society, finding it a corrupt world of the walking dead, an old, very old metaphor for the spiritually asleep and ignorant human being locked into the mode of forgetfulness of Being. The first season polarized the corrupt and decadent metropolis against the exospheric nomadic society, privileging the latter social formation as a stateless mode of wandering and exile in which experiments with new social structures no longer bound and constrained by the City as a pressurized apparatus of social capture were undertaken.

The second season moved from the city and the nomadic tribe to the farm as ideal society, capturing an Andrew Wyeth nostalgia for a primordial American way of life as idealistic. During the Industrial Revolution, populations in the West migrated from the countryside to the great new cities, but nowadays, the city is precisely the place to escape from. Hence, the subtext of John Carpenter’s Escape from New York and also The Truman Show. Whereas in the time of the Black Death in the fourteenth century, the city, too, was infested with the dead (in that case, with those killed by the plague) and had to be escaped from into the countryside: hence the characters of Bocaccio or Chaucer who leave the city behind on their way to greener pastures. But now, once again, on the turn of the historical spiral, the city is infested with a new kind of dead, the walking dead, that is to say, consumers entranced into hypnotic states who have had their upper brain functions zeroed out by new technologies and consumer advertising that have turned them into zombies. The authentic life, that is to say, must be found elsewhere.

But the farm turns out to be merely an illusion of safety and is very quickly infested with the dead, just as nowadays there is no quiet place on earth left where one can be free of the noise of the beer-swilling, barbecue-grilling mob.

In the third season, the archetype of the prison as dystopia is polarized against the new utopia of the ideal American small town. Neither isolated farm nor crowded metropolis, the American small town is held up as a potential ideal, at least by contrast with the hell of the prison, but it, too, is found wanting. We are not told yet, but it is clear that the small town is merely the surface facade — like Smalltown America at the entrance to Disneyland — of a bizarre and sinister social experiment of manipulation and crowd control.

The prison which the wandering band of protagonists holes up in is, of course, a kind of updating of Dante’s Hell: it is an Anti-Sphere, to use Peter Sloterdijk’s term, not an ideal society at all, but a place where the social remainder, the supplemental excess of those who do not fit in, as it were, spills over.

When the protagonists, at the end of Season Three, make their way from the prison to the small town in order to rescue their abducted friends, we realize that the show is replicating Dante’s ascent from Hell to Purgatory, for the small town is a kind of purgatory where one must remain stranded, like Andrea, until one’s karmic debt is worked off.

Dante’s Hell, though, was a foreshadowing of Foucault’s Disciplinary Society, for it clearly prefigures the Great Confinement of the 17th century, in which the mad were for the first time gathered into asylums, an institution whose sequel was the advent of the prison at the end of the eighteenth century. Foucault is thus revealed as a kind of disguised science fiction writer who picked up from where Dante left off, for his retroactive portrait of the European institutions of discipline and confinement is a vision of Europe as a Hell to be escaped from, a dystopian place in which a hidden power elite manipulates the individual from behind the scenes, as it were. Dante’s Hell is Foucault’s prison, in which Foucault stands in for the reader as a sort of modern Virgil guiding him through the dark journey.

But the myth of the world as a giant prison is, of course, an old motif of Gnostic mythology, for the Gnostics, too, imagined that the world was a grand prison manipulated by a power elite known as the Archons, who constructed human bodies as material prisons for souls as fallen sparks of light. The world as a whole was imagined as a physical hell to be escaped from at any and all cost, precisely through the process of gnosis, or the remembrance through anamnesis of one’s celestial origins in the Plenum of Light.

Those who had forgotten their soul’s own origins in the realm of Light, however, were regarded as “sleepwalkers,” or, in other words, the walking dead, cut off as they were from any remembrance of the Kingdom of Light.

The image of the zombie as a figure of devolved consciousness, in which the neocortex and the mammalian midbrain have been shut down, with the human individual reduced to operating merely at the state of the reptilian brain stem is an image of spiritual degeneration back to the motive economic concerns of a merely animalistic way of existence, a way of existence, of being thrown, as Heidegger would say, that is not at all a proper and efficient use of the human being’s potential as Dasein.

The risen dead was an image, in Biblical times, of the Last Judgement: all the paintings of the Last Judgement, especially of the fifteenth century Netherlandish painters such as Rogier van der Weyden and Jan Van Eyck, show the dead rising from their graves as a sign of the End of History. The image of the risen, homeless dead, then, has actually been with us as a sort of hidden Western iconotype all along. Its present popularity, however, is linked with the fact that we have indeed, as Steven Spielberg pictured it for us in Close Encounters of the Third Kind, reached the End of History in which the realized utopian consumer paradise as the modern equivalent of the New Jerusalem has descended from the realm of metaphysics to become actualized on the plane of the real. The task of history has thus reached completion.

We can all rest now, and go home.

Or just become zombies, robbed of a historical eschaton, wandering without aim or place in the ruins of the capitalist mega-paradise at the End of History.