Cinema discourse looks at current and classic movies from a literary point of view. We also have top movie reviews, current movie reviews, film ratings, movie blogs and movie history.
You are here: Home / Uncategorized / On Peter Jackson’s The Hobbit 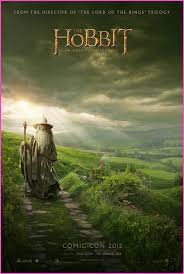 I saw this movie in IMAX 3D, and while watching it realized that the drive-in movie hasn’t disappeared at all, it has actually been placed inside of the movie theater auditorium and crossed with the stadium-style seating of the old dramatic theater houses. But instead of being gathered around in tiers like the Greeks gazing out at their own fellow citizens reenacting their ancient myths, in the IMAX theater, we contemporary citizens of the electronic state have gathered to watch ourselves perform an updating of the myth of Plato’s cave, in which to be means to be an electronic phantom on a screen somewhere. McLuhan’s insight that the movie screen shares in common with the old printed page the phenomenon of light on a surface rather than the self-illuminated light through of the electronic screen seems to have been obsolesced by this new medium of light in, in which the 3D effects open up a fissure into Being and shed light down into the crevice below, in which two-dimensional phantoms live and breathe in another parallel universe that attempts to engulf the viewer inside of it. One has the impression, while watching an IMAX 3D film, of actually falling horizontally — sliding, that is to say — into the image.

And that’s not a bad trope to characterize Peter Jackson’s adaptation of the classic children’s novel by Tolkien: the film’s predominant signifier, its “master signifier” as Lacan would call it, is the image of sliding and falling constantly into cracks and crevices and fissures in the earth. Heidegger characterized the work of art — the great work of art, anyway — as a tension between the cosmic principles of World vs. Earth, in which a work of art functions by opening up an entire world horizon within a culture (providing it, precisely, with a window into Being), while Earth is the work’s very ambiguity, its oracular-like nature to constantly evade capture by any one totalizing hermeneutic or aesthetic theory, which is precisely what makes it a great work of art, since there is always an abyss of meaning left over after the application of any particular theory to the work. Great works of art can never be semiotically exhausted, which is why we are still discussing Aeschylus and Dante to the present day.

What Jackson has captured in Tolkien’s classic, however, is Tolkien’s penchant for folding worlds inside of other worlds. Just as Derrida said that when an author cites a text, he is actually folding that text inside his own work, so Tolkien folds Dante and Wagner, as well as Scandinavian myth generally, inside of his own cosmology. The sequence of the film’s climactic finale, for instance, takes place in the bowels of the earth, where the orcs have burrowed their way into it to create a dim and dark city underground that is not too dissimilar from Dante’s descriptions of the City Beneath the World in his Inferno. Jules Verne, in like fashion, had folded Dante’s hollow earth inside of his science fiction narrative Journey to the Center of the Earth, and Tolkien, with his night sea journey in The Hobbit, has done something similar. (Bilbo’s symbolic “slaying” of Gollum with the power of the Word, likewise, is a retrieval of Oedpus’s slaying of the Sphinx by solving her riddle). As Dante’s descent downward, furthermore, is countered by his ascent upward into the heavens with his Paradiso, so the film’s climax carries the heroes up into the heavens as they ride on the backs of eagles, assimilated to the powers of the Spirit in opposition to those of the Earth and its internal organs.

Folding worlds inside of other worlds is a way of capturing and preserving them, the way the entire prehistoric world of the Jurassic is folded up inside the DNA of an insect in amber. The “vanished” world, in other words, is still there: you only need to know how to make the Derridean mark, like Gandalf’s inscribing of the rune on Bilbo’s door at the film’s opening, in order to cross over the threshold to enter it.

Heidegger, in his work, was paying farewell to the metaphysical age — that is to say, in the language of Jean Gebser, the epoch of the rational consciousness structure, or in that of Karl Jaspers, the Axial Age — whereas Tolkien, in the 1950s, was paying farewell to the age of the mythical consciousness structure which he saw as threatened by the rationalism and machinery of the Industrial Age that had come to surround it on all sides. The orcs in his narratives are associated with mining and metallurgy, and they are a coded inscription for the Industrial powers generally speaking. Tolkien’s narratives are an attempt to create a kind of reservation, or public park in which the mythical landscape is preserved unspoiled for those who still want to visit that world to see what it was like.

The Hobbit, like Jurassic Park, is a wonderful zoo in which other worlds, like a natural history museum, have been put on display for our own edification. The 3D effects contribute to this sense of a moving diorama of the kind you might encounter in the Metropolitan Museum of Natural History, in which wax figures of Neanderthals have been assembled in such a way as to reenact their vanished world as public spectacle. The high projection speed of Jackson’s opus, likewise, gives to the characters a kind of wax museum-like effect that is appropriate to Jackson’s and Tolkien’s project of fossilizing ancient Anglo-Saxon myth in electronic amber.

But though the film is a showcase of marvels, I think we have to admit to ourselves that this isn’t really cinema anymore. The days of great cinema are disappearing over the horizon behind us, along with all the other structures of the Late Period of the metaphysical age. The Hobbit, with all its great technical electronic apparatus in IMAX and 3D and high projection speeds (electronic technology is essentially foreign to the very nature of cinema as an electro-mechanical medium) is too polygeneric and multimediatic for it to be any longer an example of great cinema. Instead, it is a kind of moving wax museum, a modern updating of P.T. Barnum’s houses of spectacle and amusement, full of stage tricks and gimmickry to draw gasps from the crowd.

Film is returning, full circle, to its origins in the dimly lit vaudeville stages and noisy attractions of carnival culture.