Cinema discourse looks at current and classic movies from a literary point of view. We also have top movie reviews, current movie reviews, film ratings, movie blogs and movie history.
You are here: Home / Uncategorized / On Michael Douglas as Liberace 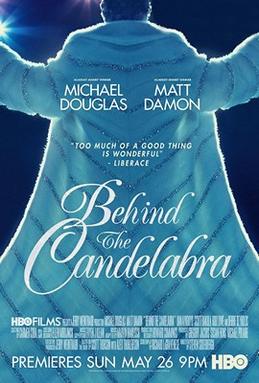 The Celebrity Morphodynamics of Liberace:

A Review by John David Ebert

According to Arnold Toynbee, in his monumental work A Study of History, pre-Civilizational societies are locked into a state of arrest because they derive their particular form of “social mimesis” from imitating the dead ancestors, which therefore orients them toward the past. Civilizations, on the other hand, develop into a higher species of human society precisely because their “social mimesis” has shifted from an orientation to the past and the cult of the dead, toward the present, where their social mimesis is derived from imitating the living creative personages of their societies. The living pharaoh, for instance, is an incarnation not of Osiris, the god of the dead, but of Horus, the living and vibrant sun god which soars across the heavens on a daily basis. Everyone, in ancient Egypt, wanted to be like him, including the nobles of the Fifth and Sixth Dynasties who modeled their tombs after his and demanded to be mummified just like Pharaoh.

In today’s age of civilizational breakdown, when the creative elite has devolved into a dominant minority which must lead by force rather than inspiring creative mimesis on the part of its social proletariat, the social mimesis has now shifted from imitating such creative personages as Goethe or Beethoven to imitating celebrities who, in the age of Adorno’s Culture Industry, now provide the body proletariat of the society with their primary models of mimesis.

However, in the age of Zygmunt Bauman’s “liquid modernity,” such models as are provided for the imitation (largely) of the young are of an extremely unstable and ephemeral type (by contrast with the saints of the Medieval World, let’s say), which change form rapidly and do not stabilize, if at all, for longer than a decade or two at best. Imitating them is a hazardous undertaking, and can cause tremendous damage to one’s sense of self, as HBO’s biopic of Liberace, directed by Steven Soderbergh, reveals.

The film is based upon a memoir written by one Scott Thorson, who met Liberace during one of his legendary Las Vegas performances long about 1977. Liberace began an affair with the twenty-something Thorson — played brilliantly by Matt Damon in one of his best roles — and hired him on as his private assistant, at the same time immediately escorting his previous young male lover / assistant out the front door.

Thorson is so dazzled by the blinding brilliance and Platonic Light of the Liberace archetype — an ersatz updating of the Greek mythical figure of Orpheus crossed with Apollo — that he very quickly begins to lose his own sense of self, as Liberace imposes upon his young lover (Euridice / Hyacinth) a series of plastic surgery operations that will so alter Thorson’s visage as actually to cause him to resemble a younger version of the televisual avatar of Liberace himself. Liberace, meanwhile, undertakes a series of similar operations which also have the effect of ironing years off his age.

The implications of this Hollywood – Vegas remodeling of the Self are staggering, for they imply that in the age of Liquid Modernity, the Self no longer exists in any essential way at all (as the French have been saying for some time now), but is a pure creation of technicity and artificial engineering. The Jungian – Fichtean idea of the Self as a hidden core monad at the center of the psyche can now be (safely) tossed aside onto the metaphysical scrap heap in favor of Peter Sloterdijk’s “Operable Man,” a fluid, disintegrating river of the self that can never be stepped into twice. The Self is now, to borrow Bernard Stiegler’s phrase, “an industrial temporal object,” which can be manipulated, shaped and sculpted at will.

The costs of this revisioning soon become apparent, however, as Liberace imposes yet another new model on his young assistant before he has had much time to metabolize the first one: not only will he be remade in the Image of a younger clone of Liberace himself, but Liberace sets about legal machinery to “adopt” Thorson as his own son. Thorson, as his personal image dynamics are set into hyperthyroid metabolism, must now rapidly adapt to the demands of Liberace the God of Music, as he must shift now from playing the Lover of the god to becoming his own son. In doing so, it becomes apparent that Liberace is actually in process of an act of asexual reproduction, splitting and cloning himself like a primordial bacterium. Thorson must play the role of the clone, and in order to adapt to the stress of the image shuffling, he becomes addicted to diet pills and cocaine, which have the effect of adjusting his consciousness to the acceleration of temporality that he has been thrust into as a by-product of the celebrity lifestyle.

As the film unfolds, and their six year relationship begins to deteriorate, it becomes evident that Thorson’s role must undergo further transformation as he actually begins to lose Being and substantiality, slowing devolving from the role of Cloned Avatar to that of the Celebrity Shadow figure that others, such as George Dyer in his relationship to the British artist Francis Bacon, were similarly forced to play. Even after they had been together for years, Liberace’s staff persistently refused to acknowledge, or even greet, Thorson, who was effectively invisible to them. He had, unbeknownst to himself, actually lost substantiality and become a shade in the maestro’s Underworld.

As Liberace, inevitably, grows bored with Thorson, he begins to eject him from the metabolism of his celebrity Crystal Palace, and the status of an emergency situation begins to dawn upon Thorson: he is being ejected from the womb of the Mind of a God, suffering the birth agonies of an Athena as she is expulsed from the skull of Zeus, and thrust back out into the slower metabolic realm of middle class banality and nine to five jobs.

But then something else begins to dawn on the viewer: Liberace has done this before, and not just once, but many, many times over the years. Each new lover is seduced in the same way, told the same lies and ejected from the system when it becomes convenient for Liberace to do so. Liberace, in other words, is trapped inside a Hell of his own making, for the Underworld is the place of obsessive, repetitive activity: Tantalus is condemned to forever reach for a fruit that always eludes his grasp; while the liver of Prometheus is torn out by an eagle each and every day. Liberace, too, is held captive inside the illusion of a glittering Crystal Palace that is simultaneously a Hell inside which he has been condemned by the gods of capitalism to repeat, with obsessive compulsion, his own mythical punishment.

Thus, the morphodynamics of the Image which beset the life of the contemporary celebrity of Liquid Modernity has its own intrinsic laws and rules: no forms are allowed to crystallize for very long before they are immediately melted down and liquidated, to be replaced by other, equally transitory forms programming new patterns of self-destructive behavior; and the faster temporal metabolism of the celebrity’s insulated life is structured by the myth of the Eternal Return, in which the temporality of Average Everydayness that is accessible to civilians is completely denied to him. (When life takes on the structure of a Myth, banality is exiled). A new stratum of temporality is thus laid atop all the other strata of human Dasein by the cult of the celebrity: a much more rapid and therefore brittle temporality that cycles through forms and human beings at a dizzying pace, precisely the type of pace that produces catastrophes as a general rule. Human life, suffice it say, is not meant to be lived at such speeds, a speed with a pace that is dictated by electronic technologies, which, because of their rapid acceleration, send human avatars crashing into each other like automobiles on the Interstate Highway.

Michael Douglas’s performance as Liberace, it must be said, is one of the very best of his career, and worth the price of admission alone. Douglas’s own Image Avatar — in which he too has been condemned to the obsessive repetition of replaying the same role over and over again — is shattered (and now must be remodeled) as it comes up against the singularity of this grand performance of one of the century’s greatest celebrity Narcissists.

And Soderbergh’s biopic itself watches with all the compulsion of the best of the great Hollywood biopics.

Indeed, if it had occurred to me at the time I was writing my book, Dead Celebrities, Living Icons, a chapter on Liberace would have been de rigeur.  But alas, this belated film review will have to do.

–Dead Celebrities Living Icons: Tragedy & Fame in the Age of the Multimedia Superstar can be ordered on Amazon at: http://www.amazon.com/Dead-Celebrities-Living-Icons-Multimedia/dp/0313377642/ref=sr_1_1?ie=UTF8&qid=1382225948&sr=8-1&keywords=dead+celebrities+living+icons