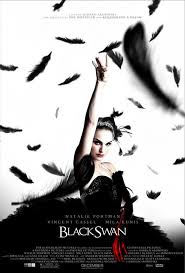 This involves dreams, symbols, and sex (hot ballerina lesbian sex).  How do the critics handle this? Manohla Dargis’s review in the New York Times captures the movie with such phrases as: A witchy brew of madness and cunning / visceral and real / giddy, sometimes sleazy exploitation-cinema savvy / hammering her toe shoes into floor much as Jake La Motta pounded his fists into flesh / surprises despite its lusty or rather sluttish predilection for clichés / trippy psychodrama / a sexcapade / slow-creeping hallucinatory flights of fantasy / one delirious, phantasmagoric freakout.

Yes, all of that is there.  But there is a simple story here that few critics tell, perhaps because it is too obvious.  Nina, our ballet dancer, is artistically limited by her failure to grow up and her repressed sexuality.  Here we are reminded more of André Gide’s The Immoralist than of the Red Shoes.  In The Immoralist, Michel is a promising scholar, but completely repressed.  The story follows his plunge into the North African desert, which parallels the opening of his inner self that leaves his young bride dead.

The Black Swan opens with a dream announcing that what will follow will be the discovery of her sexuality.  The announcing dream opening is common, but most prominently used in Bergman’s Wild Strawberries, where the dream announces that time will stop and our elderly physician will be able to revisit and reevaluate his past to find the source of his numbness to life.

Nina appears to be also having mental problems.  On the way to work, she encounters herself on the subway.  As the movie progresses, she has more and more erotic and violent experiences that might or might not be real.  But the movie allows us to accept these experiences as perhaps just heightened artistic sensibility.  The movement of the story line is simple and direct.  Nina is rejecting her over-protective mother and her childhood, and opening to her aggressiveness, competitiveness, and sexuality, and integrating them into her art.  In the final scene she lies on her back, blood spreading over her white tutu from a self-inflicted vaginal shaped wound in her lower abdomen.  Her sexuality is open and her art is complete.

There has been a spate of books over the past several years telling us that we are all intelligent, we are all creative, and even that there is genius in all of us. It just isn’t so, and the destruction and creation involved in real creativity is more chilling than these books would have us believe. In a way, that is what The Black Swan is about. Creativity begins with upbringing, and the movie presents us with the sacrifice Nina’s mother has made in preparing her to be a ballerina. Then mastery, the years of disciplined practice. Expressing one’s soul—in Nina’s case, bringing her erotic self to the surface and integrating it with her angelic self. And finally, being in the world—having something to say and manifesting it for an audience in the world as it is.

In exploring creativity, one can’t do better than look again at Nietzsche’s “Three Metamorphoses of the Spirit” in Thus Spoke Zarathustra, where he presents his parable of the camel, the lion, and the child. And the dragon. It could be an outline for The Black Swan. Nietzsche writes:

“Of the three metamorphoses of the spirit I tell you: how the spirit becomes a camel; and the camel, a lion; and the lion, finally, a child.

There is much that is difficult for the spirit, the strong, reverent spirit that would bear much: but the difficult and the most difficult are what its strength demands.

What is difficult? asks the spirit that would bear much, and kneels down like a camel wanting to be well loaded… like the camel that, burdened, speeds into the desert, thus the spirit speeds into its desert.”

In the loneliest desert, however, the second metamorphosis occurs: here the spirit becomes a lion who would conquer his freedom and be master in his own desert. Here he seeks out his last master: he wants to fight him and his last god; for ultimate victory he wants to fight with the great dragon.

Values, thousands of years old, shine on these scales; and thus speaks the mightiest of all dragons: “All value has long been created, and I am all created value. Verily, there shall be no more ‘I will.'” Thus speaks the dragon….

To create new values–that even the lion cannot do; … what can the child do that even the lion could not do? Why must the preying lion still become a child? The child is innocence and forgetting, a new beginning, a game, a self-propelled wheel, a first movement, a sacred “Yes.” For the game of creation, my brothers, a sacred “Yes” is needed: the spirit now wills his own will, and he who had been lost to the world now conquers the world.

(This abbreviation is from Walter Kaufmann’s translation. You can find the whole parable online.)